One of the first articles I wrote for this site, Nintendo's Storyline (written more than a year ago), dealt with Miyamoto's claim that the order of the games is OoT, LoZ, AoL, and ALttP, and that LA could fit in anywhere. I proved his claim wrong in several areas, in the context of my previous theory about OoT's ending. But if you know anything about my current theory about OoT's ending, you know that it's entirely different.

In light of some good theories and arguments from Martin Anderson (thanks Martin!), I think that it is time once again to examine this theory in detail. I will list the most important objections to Miyamoto's order in the form of questions, and answer them one by one. Note that this theory assumes that the same Link stars in OoT, LoZ, and AoL, and a different Link is in ALttP.

If Ganon is imprisoned in the Sacred Realm in OoT, how does he escape in LoZ and kidnap Zelda?

According to my current theory about OoT's ending, when Link is sent back in time by Zelda he is sent back to a time after Ganondorf has already entered the Sacred Realm and split the Triforce. (If you don't understand, please read the articles I have written about OoT's ending.) The Imprisoning War hasn't happened yet, so it's entirely possible that, while Link is away in Majora's Mask and possibly the "Fruit of the Mysterious Tree" games, Ganondorf changes himself into Ganon and, already having stolen the Triforce of Power, kidnaps Princess Zelda. When Link returns from his journeys he saves Impa and sets the stage for LoZ. 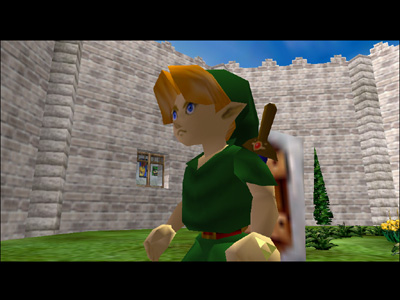 Another possibility is that Link knows he has the Triforce of Courage, but after LoZ, instead of uniting the Triforce, he gives all the pieces to the "great king" instead, so he can keep the peace. Or, after OoT, Link gives the Triforce of Courage to the "great king," and after LoZ gives Power and Wisdom to the king also. The possibility of this rests on whether the sleeping Zelda was the Zelda in OoT, which is a question dealt with in the question after next.

If you've read a lot of fantasy fiction, you'll know that some magical documents are not simply words on paper. Magical spells can be imbued into the document, giving it the power to do special things to the reader. How do you think that "although [Link] had never seen the letters before, he found that he could read them as if they were talking to him"? I think it's possible that the words written in ancient script don't convey just one message: they give the reader a message from a sentient being, an entity that exists at the SAME time as the reader. And who is this being that is talking to Link through the scroll? There are several possibilities: Rauru, Kaebora Kaepora, or any other ancient Sage who continued to live past his death. Another possibility is that the "great king" or the sleeping princess is talking (see the next question). When the scroll "talks" to Link, it is talking of current times, not ancient times.

Another possibility is that generations ago a Hylian sage had a prophecy about this time period, and wrote a message for the hero who would read it in the future, concerning the events of the hero's own time period. After all, in the ALttP manual, the "message for the legendary Hero of Hyrule" concerns what Link should do in that time period, since "we prophets of the Hylia know what your future holds." They talked about future events, not current events. It's possible, then, that the scroll is simply a prophecy, and that it is written from the point of view of someone in Link's own time period.

What is the identity of the Sleeping Zelda, according to this theory?

After thinking about it for a while, I've concluded that the sleeping princess can either be an ancient one who lived in the time of Rauru (see The Sleeping Zelda, Revisited for the reason why, if you don't know about this), or she can be the Zelda from OoT and LoZ. Let me explain:

While Link is away on his journeys, and helping to restore Hyrule, the king dies and Zelda is put to sleep. Power goes back to Link, Wisdom goes to Zelda, and Courage is hidden away in the Valley of Death. Years go by as Link, unaware of Zelda's fate, helps restore Hyrule. When the Triforce symbol appears on Link's hand, he goes to see Impa, who takes him to Zelda. Impa says that "long ago, when Hyrule was one country, a great ruler maintained the peace in Hyrule using the Triforce." Long ago could very well have been 5 years, and the king of OoT meets the description of a great ruler who kept the peace, since he ended the Civil Wars and united the races of Hyrule. The ancient scroll that was sealed in the same room with Zelda contains a message from the spirit of the king.

The account of the Imprisoning War in the ALttP manual seems to contradict this whole theory. It says that Ganondorf got the Triforce, evil men joined his army, and then he attacked the castle and was imprisoned in the Sacred Realm. It doesn't mention him turning himself Ganon, dying, and then coming back to life before the Imprisoning War was fought. How do you explain this?

Basically, if you look at all the evidence, ANY amount of time up to seven years could have elapsed between Ganondorf getting the Triforce and Ganon attacking the castle. In OoT, when Link wakes up seven years later, Ganon(dorf) could have JUST attacked and conquered the castle, or he could have been a conquering ruler for seven years. OoT doesn't say. So there is plenty of time in there for Ganon[dorf] to be defeated and brought back to life.

The only thing the ALttP manual says about this time period is that "in time evil power began to flow from the Golden Land and greedy men were drawn there to become members of Ganon's army. Black clouds permanently darkened the sky, and many disasters beset Hyrule." Isn't it possible that these disasters included the events of LoZ and AoL?

Alright, it's possible that LoZ and AoL could have happened between Ganondorf getting the Triforce of Power and the Imprisoning War. But how did Ganon come back to life after AoL and get the whole Triforce?

Martin Anderson pointed out that after AoL, the united Triforce was probably sent back to its home in the Golden Land. Unfortunately, Ganon was brought back to life somehow (probably by his minions sacrificing Link), so he stole and split the Triforce again. This time Link wasn't in his way, so Ganon was able to get the other two pieces before the Imprisoning War took place.

What about Miyamoto's claim that Link's Awakening can go anywhere in the storyline?

I'm sure Miyamoto doesn't mean that it can go just anywhere - it has to take place after one of the known Links has destroyed Ganon. This new theory supposes that there are two Links, one that destroys Ganon in LoZ and one that destroys Ganon in ALttP. It should be obvious that Link's Awakening could come after ALttP - the same art is used, and the Link of ALttP fulfilled the Hyrulian prophecy of the Legendary Hero as specified in the LA manual.

What's not so obvious is that LA could take place after LoZ also. Just because Link wasn't CALLED the "Legendary Hero" in LoZ, doesn't mean he WASN'T one. Perhaps the LA manual is referring to the fact that Link fulfilled the prophecy of the Legendary Hero of Time in an alternate future. The Majora's Mask manual says that Link "fulfilled his heroic destiny and took his place among legends," and that also he was "done with the battles he once waged across time." These seem to suggest that Link indeed fulfilled the prophecies about the legendary Hero of Time.

The LA manual also says that "Hyrule enjoyed only a precarious peace" - does this mean that the peace was broken by something later on, like Ganon's revival? After all, the restless people were murmuring, "who knows what threats may arise from Ganon's ashes" - which is a major concern in AoL, where sacrificing Link and sprinkling his blood on Ganon's ashes would revive Ganon. It's consistent that, a few years after LoZ, Link could have done the events of Link's Awakening. Therefore, from a certain point of view, Miyamoto was correct in saying that LA can come anywhere in the series.

Is it possible that, in fact, the Link in ALttP is the same Link as in OoT, LoZ, and AoL?

Normally I would say no, definitely not, and cite this quote by Sahasrahla in ALttP: "Three or four generations ago, an order of knights protected the royalty of the Hylia. These Knights of Hyrule were also guardians of the Pendant of Courage. Unfortunately, most of them were destroyed in the great war against evil that took place when the seven wise men created their seal."

But look at this quote from the ALttP manual: "Many centuries have passed since the Imprisoning War. The land of Hyrule healed its wounds and the people lived in peace for a long time. Memories of the vicious Imprisoning War faded over the generations..."

So no, the Link in ALttP cannot be the same Link as in OoT, LoZ, and AoL.

As interesting food for thought, consider this theory: the six games in the Zelda series represent two different alternate universes. Both start at a common point, OoT, and then branch off into two different scenarios. In one scenario, the first half of OoT happens, but Link wakes up and then Majora's Mask, LoZ, and AoL happen. In another scenario, the first half of OoT happens, but Link stays asleep for seven years and then the future part of OoT happens (i.e. the Imprisoning War), and then centuries later ALttP and LA. I don't like this theory, but it works if you believe that time travel creates alternate universes, and it's interesting to think about.

If you've read any of my articles before, you know that I like to give a possible scenario of a portion of Hyrule's history in order to show the consistency and tidiness of a new theory. I can't do that here; there are too many possible ways things could have happened, all of them equally likely. I will therefore leave it to you to post your ideas in the forum and comment on the validity of this theory.

One more thing you might be wondering: how does this theory compare to my current theory, which puts OoT and Majora's Mask first, ALttP and LA second, and LoZ and AoL last? Overall, I think my theory has less loopholes and inconsistencies, and requires less manipulation and stretching of the facts to make it work. I am, therefore, not going to be switching over to Miyamoto's time line anytime soon, and until the next Zelda for GameCube throws some more light on the storyline as a whole, I will only keep this theory in mind as a possibility.