The AoL map can be confusing at first. What are all these new landmarks? And why is Death Mountain in the south instead of in the north? The solution to this problem is quite simple. The AoL map shows a different area of Hyrule than the maps in the rest of the games. Whereas all the other games show the area of Hyrule south of Death Mountain, the AoL map shows the part of Hyrule north of Death Mountain. In this section of the article, I refer to the part of Hyrule shown in the AoL map as "northern Hyrule," and to the area shown in all the other maps (Hyrule Field, Lake Hylia, etc.) as "southern Hyrule."

The confusion doesn't end here, unfortunately. If you look carefully at the AoL map, you will see a small region south of Death Mountain, called the "Death Mountain Area" in the AoL manual. You might think nothing of this area at first, and just assume that southern Hyrule is south, off the map. However, I have heard that Nintendo intended this area to represent southern Hyrule (I don't know this for a fact, so I won't consider this as strong evidence). 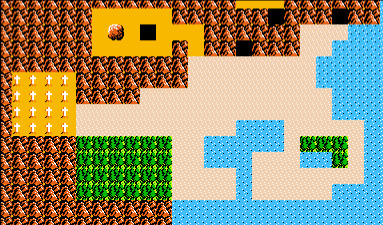 The Death Mountain Area does looks kind of like southern Hyrule: there's the lake in the middle and the river leading down to the ocean, with the Forest of Maze and graveyard to the west, and Lake Hylia and the eastern Lost Woods to the east. Of course, a lot of detail has been sacrificed since the area is so small.

Let's look at the arguments for each possibility.

Is the Death Mountain Area really southern Hyrule? It looks very much like a small-scale approximation of southern Hyrule. The Forest of Maze is too big, the eastern Lost Woods are too small, and Zora's Fountain is missing entirely because Nintendo couldn't squeeze enough detail into such a small area. Could Zora's Fountain have dried up in a few years? After all, the AoL manual says that Hyrule was on the road to ruin. And draining Zora's River into the ocean seems like a sure way to get rid of a lot of water. Why is the Death Mountain Area so small, when southern Hyrule seems so large in all the Zelda games? Consider that in AoL, Link is shown as a small character walking on a large overworld map. When he gets into a battle or town, the map zooms in to show Link and Hyrule full-size. In all other Zelda games, Link and Hyrule are shown full-size at all times. This explains why southern Hyrule seems so big in other games but so small in AoL. It is shrunk down in AoL and shown at full size in all other games. 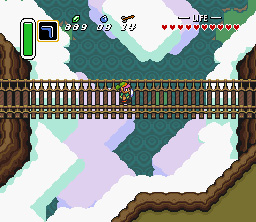 Based on such scanty evidence, it is difficult if not impossible to reach a conclusion based on logic. I think that possibility #2 explains more about Hyrule's geography than possibility #1 does, such as the second source of water in ALttP. Also, if southern Hyrule is really as small as possibility #1 says it is, why are most of the Zelda games contained within this small area? I conclude that both possibilities are equally likely.

Possibility #1 is easy to visualize, but possibility #2 might not be. So, I have hand-drawn a map to show where I think the Death Mountain Area lies if possibility #2 is true. Click on the link below to open the map in a new window.

Death Mountain Area in the time of ALttP (558KB)