In my extensive article on Hyrulian geography (A Good Look at Hyrule's Geography) I was able to harmonize, for the most part, the maps of Hyrule given in LoZ, ALttP, and OoT. However, I left an important issue unresolved: the identity of the Death Mountain area.

The Death Mountain area (or DMA for short), for those unfamiliar with Hyrulian geography, is the name given in the AoL manual for the area south of Death Mountain. Here's a picture:

Spectacle Rock:
The Key to the Whole Mystery

Here's a screenshot of Spectacle Rock:

AoL - In AoL, Spectacle Rock is located in the infamous Death Mountain Area. In the picture of the DMA given at the beginning of this article, Spectacle Rock is the two rocks in the upper left. Quote: "HAMMER... SPECTACLE ROCK... DEATH MTN." If you use the hammer on the right-hand rock of Spectacle Rock, you will destroy the rock. This opens up a hole leading to a network of underground caves (Ganon's old lair in LoZ, perhaps, or maybe a different part of the Underworld). A magic container is hidden here. 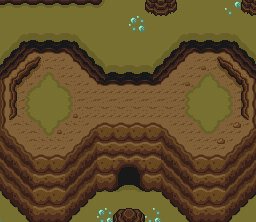 The entrance on the south side of Spectacle Rock leads to a series of caves in Death Mountain. Here one can read Sahasrahla's tile message to Link telling him to get on top of Spectacle Rock.

Spectacle Rock and the DMA

It is tempting to simply conclude that the Death Mountain area is southern Hyrule. The evidence for this possibility is strong. As mentioned in my previous geography article, the DMA looks a lot like southern Hyrule. It has the central lake, the forest and graveyard to the west, the smaller lake to the east, Spectacle Rock in Death Mountain. The DMA is surrounded by water on the south, east, and northeast. This corresponds perfectly to the map of Hyrule given in LoZ. One might object to this possibility because southern Hyrule seems too small in comparison with northern Hyrule. But, as mentioned previously, the AoL map is zoomed out with respect to all the other maps of Hyrule, so it shouldn't be surprising that southern Hyrule should appear a lot smaller than it does in other games. And, when you think about it, southern Hyrule isn't that large an area. 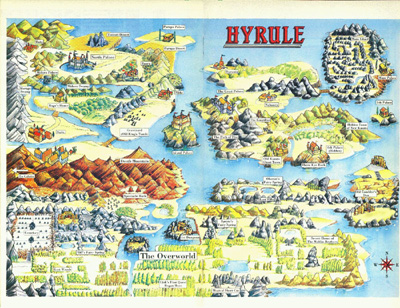 Notice how this map splits Death Mountain by a river flowing from the northern ocean (as in ALttP). The map puts the DMA (1) south of Death Mountain, and (2) north of the large lake in the middle of Hyrule Field.

I think that this placement is a potent possibility. It is true that on the LoZ map, neither the DMA nor the river from the north appear. But both landmarks could have formed in the years between LoZ and AoL. It can't take that long to form a few small lakes and grow a few small trees. The lake flowing from northern Hyrule through the center of Death Mountain existed in ALttP, and could have been blocked up afterwards. It could then have been let loose again after LoZ. Another point in favor of this possibility is that it puts Spectacle Rock in the right scale. If the DMA is southern Hyrule, Spectacle Rock seems much too large. If the DMA is only a small part of southern Hyrule, Spectacle Rock is just the right size. (Of course, everything on AoL's overworld map is exaggerated out of scale anyway, just to emphasize certain landmarks.)