Chapter 2: Chapter 1: Within the Main 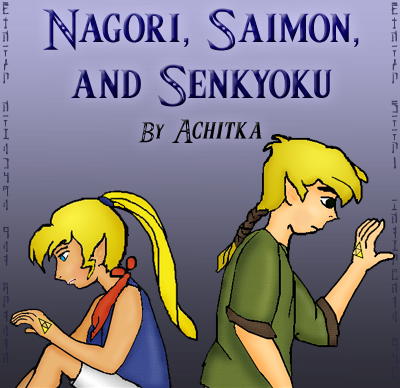 Chapter One:
Within the Main

"Miss Tetra...wake up, Miss." A shadowy figure stood in the doorway outlined by the lamps that were only at half-light.

"Are you all right Miss?"

She did not answer only nodded. She shook her head to clear out the sleepiness she still felt and thought, 'Was any of that real or just a dream?' As she rose from her bed, something clunked onto the floor. She looked down at it briefly but it really was too dark to see clearly. "Senza, what time is it?"

"Half past four, Miss. You asked me to wake you if we caught up with that sloop."

"Yes I did, didn't I," she replied absently. She looked up again and said, "Thanks Senza I'll be up shortly."

"Yes Miss," he said as he turned and closed the door to her cabin.

She dressed quickly and headed up onto the main deck. No lamps were lit where they could be seen so the only light available came from the setting moon. She looked across the wide bay and spotted the night's quarry. It eluded them for two full days and they were further west of Great Fish Island than she liked to be. She looked at the smaller ship again, "Something's not right." She looked over at her crew and watched as they prepared for the final leg of the chase.

Everything was just as it should be. But it wasn't.

She spotted Gonzo's red bandana amongst the rest and walked over to where he stood near the mast. He was a good first mate, though he could be a little emotional at times. He was five years older than she was, and with the exception of Niko, he was the closest in age. On her way across the deck, she hesitated due in part to confusion she was feeling again. She just could not shake that feeling that something was not right.

The wrongness of it, reminded her of Ganondorf's assault on her dreams. In the days leading up to the rescue of Aryll and the other girls, her dreams had been nothing short of horrifying. She shivered. The lingering effects still haunted her, despite the fact that almost seven years had passed since that fight atop the tower. It had taken most of her strength to ward off those ever-tightening probes. She never should have let fairy boy leave her in the castle no matter what the King said about the danger. She'd been stuck down in that dreary basement way too long. She could not forget and would not forgive for any of it and intended to hunt down and destroy every last one of his cronies if it took her the rest of her natural life.

She glanced out over the water again and thought, 'This is personal.' She looked back out at the way they'd come, nothing but ocean for miles. She watched a lone seagull as it made its way against a fast blowing wind. On the edge of it all, a melody lingered as if to remind her of something forgotten. 'Well no time for that now,' she thought and returned her attention to the crew. "Gonzo?"

A very large young man with a goatee turned away from another sailor he'd been speaking to and answered, "Yes Miss?"

"Um, any word from Link lately?"

He never was very good liar. "Gonzo," she said, as she took a few steps closer. "I know I told you to burn anything he might happen to send, but I also know you two are good friends." She moved closer still and looked him in the eye. "I also know you didn't exactly follow my orders." More silence. She tugged on her jacket in frustration. "Well?"

"Maybe one or uh, two letters." Her impatience with his answer was clear as he quickly added, "There may have been more..." he hesitated again.

"Seven. Well six really, one was from Aryll."

"I see," she said quietly, "and of these how many were actually destroyed."

He cleared his throat, "One," He said as he looked straight ahead.

"And of course that would be the one I took care of."

His eyes shifted and he swallowed. "Yes Miss."

She looked at him for a moment as she tried to decide what would be the best punishment for disobeying a direct order and asked, "When was the last one received?"

"Almost a week ago."

"Fine, when we're finished here, bring them to me." He nodded. "Good, now assemble the crew on deck." For the first time she noticed his worried look, she scoffed and added, "No, I will not be having any ritual burnings in my cabin."

"Yes Miss." he said and appeared very relieved. She returned her attention back to the ocean. The melody she thought she'd heard earlier faded away as if it had never been. She looked through her telescope at their intended target, just sitting there, not moving at all. The only thing she could see moving were a bunch of gulls circling overhead. 'Weird,' she thought. This morning's mission still gave her a bad feeling, but she allowed her anger to overrule her caution.

"Hoy, men listen up," she spoke quickly in a hushed angry tone, "We'll be coming up on the lee so not a sound until we're right on top of her. That crew is slipperier than a barrel of eels. Surprise is what we'll need if we are going to take 'em out. Everyone understands their assignments?" The only replies made were nods. "Good. Let do it."

As they bore down on the smaller ship, Tetra's earlier misgivings came back to life. Closer inspection of their quarry made her realize she could almost see right through it. She looked up again and knew why there were so many gulls. "Damn it!" She cursed under her breath. "SENZA! BREAK THE LINE! IT'S A TRAP!"

When the big man spun the wheel, the larger pirate ship lurched dangerously. The crew caught off guard tumbled about the deck as they struggled to regain their footing and pull the big mast into line with the ship's rudder. By now though, the ship was moving at a good clip when the whirlpool started to form. "Drop that sheet we've got a giant octo to port! GAH! Someone, go get Niko!"

As the wind picked up, someone disappeared below, "Watch those line, Gonzo!" Just below her Niko appeared on deck. "Man that gun! We're low on Ammo so make your shots count!" He nodded a little nervously and she watched him as he ran aft toward the waiting cannon. She turned back to Senza she added "Keep her as steady as you can." She dropped down to middeck and headed for the cannon. It was all up to Niko now. How many bombs did they have? Niko may not have been the sharpest knife in the drawer, but he was the best shot on the ship.

She reached the stern just as the first shot fired. BOOM! The Octo, she was relieved to see, was only a six-eye.

Three down, three to go. With three more shots the Octo went down. "Good job Niko," she said and smiled, "I knew I could count on you." Niko beamed at the attention and the rest of the crew had some fun tossing him about. She waved to Senza, glad to have his steady hand at the helm.

She lowered her hand the glint of something shiny caught her eye. She was almost afraid to look, but knew it could only be the Triforce of Wisdom. It lay dormant within her these past years with hardly a glimmer. What set that off? She wondered and without warning, the glow moved forward from her hand up her arm until she found herself saturated in a bright golden light.

When the gleam subsided, she found herself some place she had never been before. Everything around her was in shades of gray and moving so quickly that it reminded her of Lenzo's new moving picto-box. Her arrival had gone unnoticed by the monsters that wandered in and out of the rooms and she made her way down a narrow corridor until she came to what appeared to be a locked room. When she tried to push the heavy looking door, she fell through like it wasn't even there.

The room appeared to be a cell of some kind. It contained a dirty looking bowl of water and a not too clean looking pile of straw. She stifled the impulse to cover her nose, there was no smell, but she could imagine what it must be like. She turned in time to see the door burst open. There were no sounds as two moblins dragged a limp form over to the pallet. They dropped their unconscious cargo unceremoniously to the floor just short of it. They appeared to laugh harshly then left the room.

Tetra turned to examine the crumpled man on the floor but, but something made her pause. She focused on the man and realized he was out of his time. He didnt belong here and his whole countenance reeked of the shadow. Worse than anyone shed ever run across next to Ganondorf himself. She backed up and thought, This was bad, very, very bad Tetra started when the entire scene started to fade from and she felt herself move again along the path of light. It became so bright she closed her eyes and when she could open them she expected to find herself back on her ship. Instead, she found herself surrounded on all sides by a great crater.

Comments on this chapter

Amazing, there are a few spelling/grammar errors I saw, but heck happens to me, too.

You know you can't make new chapters this long in a single day Dark. In other words, lay off it and just wait for another awesome chapter, ok?

I do all MY chapters in a day.
Oh, well. Can't expect a lot from every one.