As with the manuals, the Zelda games also have three elements: text, imagery, and gameplay.

Within the games, I define text as anything written down that doesn't refer to the gameplay. This includes anything people say, comments that the game makes (like when it describes an item), anything that signs say, and place names. This does not include gameplay instructions (like when the Deku Tree tells you to press up-C to talk to Navi), as already discussed in the section on instruction booklet canon (see my arguments for gameplay instructions by going back a page).

In-game text isn't always as exact as we would like it to be, especially in the older games. In LoZ and AoL, everyone spoke in about seven word sentences, leaving out grammar and punctuation to save space. I don't think that people really talked this way. Due to the restrictions of the game engine, this text is only a rough approximation of what people really said.

This doesn't diminish the historical reliability of the text. The purpose of the text in any game is to not give exact quotes of what people said, but to give the general spirit of what must have been said.

The games were made to represent history, and the text of the games is the closest thing we have to the true history of Hyrule, so I accept text as having the greatest authority.

Imagery is everything in the game that you can see (outside of the text, of course).

While the definition of in-game imagery is straightforward, the analysis of its relative canonicity is more complicated. First off, let's define what the purpose of the imagery is. Imagery is supposed to represent, as closely as possible, what Hyrule and it's characters really looked like. Due to graphical and structural limitations, older games cannot represent a very accurate picture of Hyrule. Especially in LoZ and AoL, you can see that in enemies and characters much detail, color, and sense of scale are lost. Hyrule is broken down into sprites and 8-bit color.

So how does the graphical quality of the imagery affect its purpose? It is true that the imagery provides a very good picture of the real Hyrule. But, because the quality of the imagery is low compared to the real thing, this reduces the credibility of imagery. Also, since game designers can take liberties and include non-historical throwbacks to previous or entirely different games, this also reduces the credibility of imagery. If imagery is taken as absolutely true, we can draw many erroneous conclusions.

To illustrate my point, let's look at some bizarre conclusions you could draw by taking in-game imagery too seriously:

You might need some convincing for the last two bullet points. The maps of Hyrule, while not exactly the same and not entirely consistent, are similar enough if you study them enough. See my articles on Hyrule's geography.

For the last bullet point, look at these two screenshots, one from the American version of the game and one from the Japanese version: 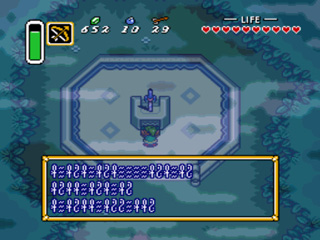 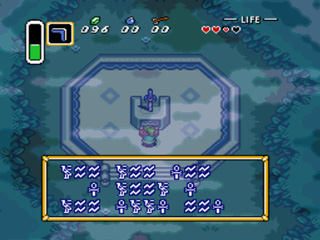 We can conclude that neither game represents the Hylian script exactly; they just give random gibberish to let the player know that this is something you aren't able to read without the Book of Mudora.

So in-game imagery, while it shouldn't be rejected, is weaker evidence than text is.

Finally, gameplay is anything in the game that you do. This includes using items, fighting enemies, exploring dungeons, and running around Hyrule. Basically, anything that you make Link do is gameplay. This does not include gameplay instructions, as I've already mentioned.

Gameplay has two purposes: first, to make the games fun and engaging (or, to say it another way, to make the games into games instead of stories); and second, to represent the history of Hyrule in a small way. It's difficult to say what is acceptable as evidence and what isn't, so let's look at some representative examples.

In the Zelda games you are free to do whatever you want, up to a point. Most of the games force you to follow a roughly linear path. Therefore, I would conclude that in the real history of Hyrule events happened in the logical order given by the game. However, you must be careful. We cannot say exactly how things happened, because the freedom that the games give the player means that Link could play through the games many different ways. So we can't say exactly how Link did things, but we have a general picture thanks to the gameplay.

Can we try to determine the order of the games by looking at the gameplay? I would argue against it. Some have tried to prove their order by looking at the items Link collects in each game. While some of the evidence might be valid, keep in mind that from game to game Link's item collection is for the most part inconsistent.

Also, items probably aren't exact representations of the real artifacts. For example, are the boomerangs in LoZ, ALttP, and OoT all the same boomerang? I can't see how we can draw a conclusion; all we can say is that Link indeed got a boomerang in these three games. Whether it's the same boomerang, and how it came to be in three different dungeons, is a matter up for debate. The same goes for any other item Link collects. There is no consistent flow of items between the games, so we can conclude that the games only approximate what items Link might have collected. If we take this sort of gamplay evidence too seriously, we will run into numerous inconsistencies and contradictions.

So if you're using gameplay as evidence for a theory, be careful. Gameplay shouldn't be given too much weight and authority, because it is weaker evidence than either text or imagery. It is such a grey area that it would take many many discussions to deal with the matter completely, and I need to keep this article short.