Young Link, currently living with his grandfather, is invited by Zelda to come to an annual fair in Hyrule market.

He comes with her and before long Vaati causes all sorts of trouble and our hero is off questing again! He journeys to the Minish Woods and soon comes across his most unusual companion yet: Ezlo, the talking hat (referred to as the "Minish Cap" for reasons revealed throughout the game.)

As he searches an unfamiliar land for fragmented relics called Kinstones, Link will have to take a closer look at the ground beneath his feet. When he discovers a magical hat called The Minish Cap, he gains the power to shrink down to the size of the Minish people, who are in grave danger. As he travels back and forth between their world and his, he'll solve puzzles, fight through dungeons and slowly uncover the evil behind their plight and vanquish it. 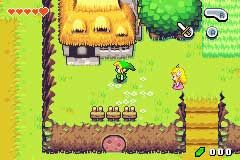